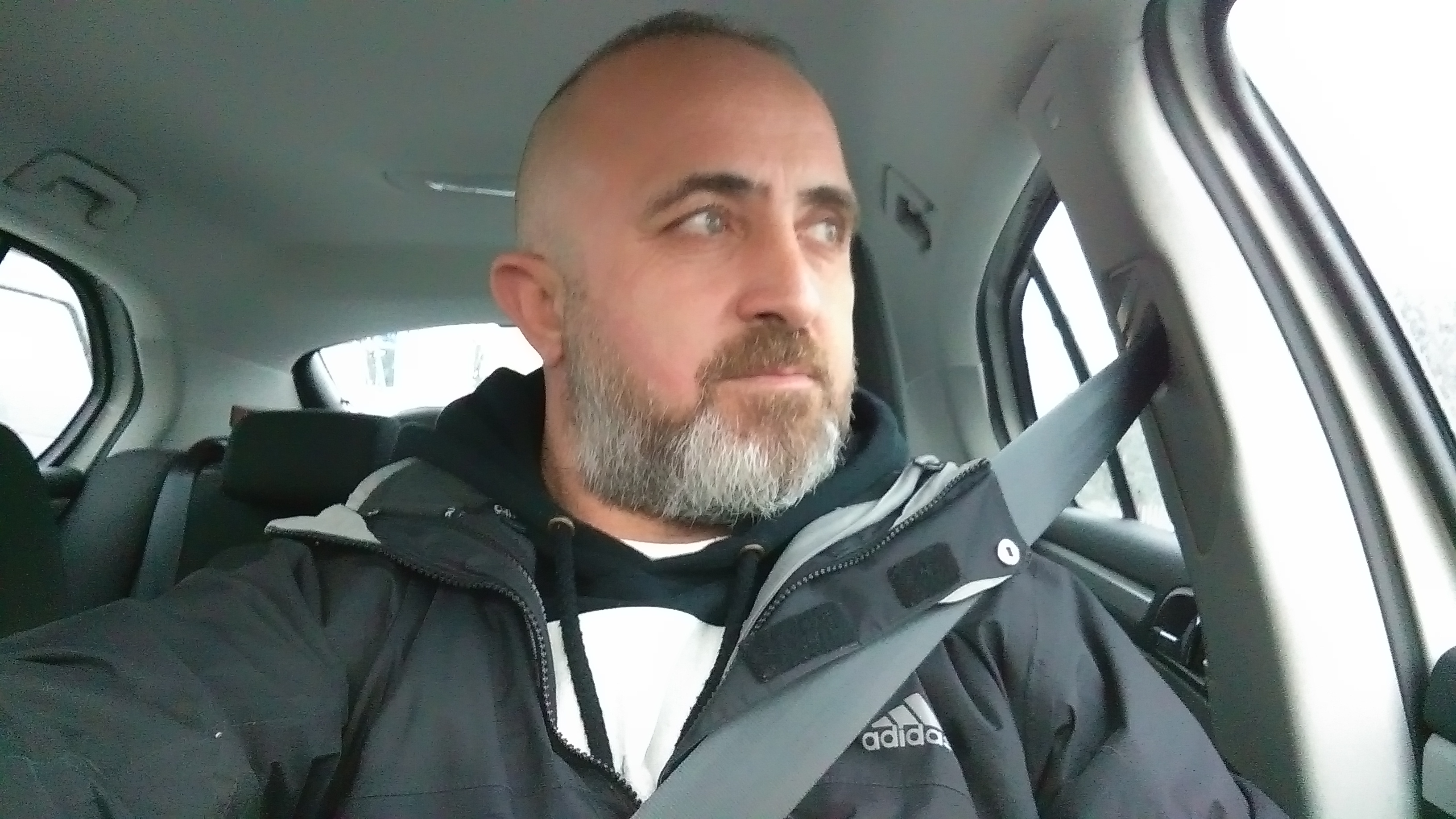 I,m English and Spanish speking official licensed Tour Guide an Driver
I prepared this page to introduce myself,in order to provide you the best service
and
inform you about what to do in Istanbul and what else to do in its neighbors
Please click on the above pages to see what tours I do.

Leaving Hotel with private car or on foot and reaching the old part of Sultanahmet (Constantinople) visited the main places (walking) walking racecourse Romano, Sultan Ahmed Mosque, Hagia Sophia, Basilica Cistern, Topkapı Palace and Grand Bazaar and if you want you accompanying you / it is you can see muybuena quality global brands watches, handbags, leather goods, jewelry, carpets, lamps and this tour take more or less up to 16:00 17:00

The ancient Hippodrome, scene of chariot races and the center of Byzantine civic life. Of the ornaments which once decorated, only three remain: the Obelisk of Theodosius, the bronze Serpentine Column and the Column of Theodosius Constantino.Obelisco is originally an Egyptian piece of art erected in 1547 BC and originally 60m height. German Fountain are also within the hippodrome area, constructed in Germany in the second visit of the German Emperor Wilhelm II brand of Istanbul, it was imported and officially opened on January 1, 1901. The source of the three domes are decorated with gold mosaics. 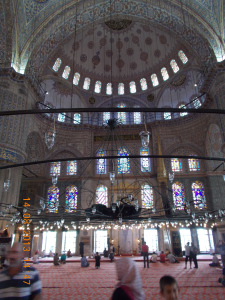 Blue Mosque was built by Sultan Ahmet I during 1609-1616 in the city that bears his name in Istanbul. It is the only mosque in Turkey with six minarets. Due to its magnificent hand-dyed blue tiles, green and white that has been named the «Blue Mosque» by Europeans. The central dome is 43 m in height and is 33.4 m in diameter. 260 windows around the mosque. 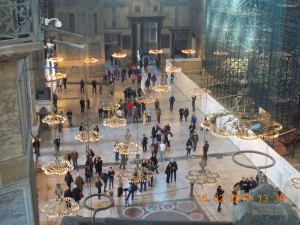 Santa Sofia was for nearly a thousand years, The largest enclosed space in the world and is still seen as one of the world’s most Important monuments arquitectónico.Es one of Turkey’s most popular attractions, drawn by the sheer spectacle of its size, the architecture, mosaics and art. Built by the Byzantine emperor Justinian in the sixth century.
Closed: Hagia Sophia (Monday)

A tour of the palace is only a single issue with so much to see and to be told. A guided tour is a must to really understand the meaning of the most popular feature of Istanbul. In short, the Topkapi Palace was the imperial residence of the Ottoman Sultans, from the Fatih Sultan Mehmet the Conqueror, until 1856. It became a museum in 1924. Parts of the palace and the Harem, Baghdad Pavilion in Hall Revan, Sofa Pavilion, and the courtroom is distinguished by its architectural heritage, while in other sections artifacts are displayed You which reflect the palace life. The museum also has collections imperial treasury, Chinese porcelain, weapons, calligraphy etc.
Closed: Topkapi Palace (Tuesday)

This tour includes: Spice Market visit, walk through the Bosporus with regular boat pass the international bridge Bosporus from the European side to the Asian side, we will see very good panoramic view 360 degrees Istanbul yvisitar Palace Beyler Beyi and if you want to compañando you / it can look very good quality leather products in the shop manufactures leather and this tour will also take more or less up to Las 16:00 17:00 depending on traffic. 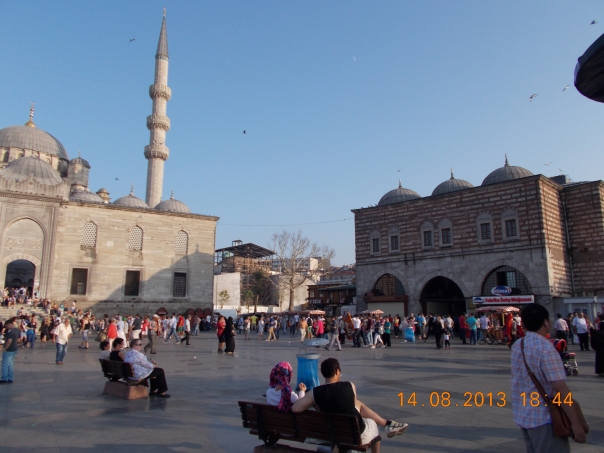 Dolmabahce Palace built in the 19th century is one of the most glamorous palaces in the world. It was the administrative center of the late Ottoman Empire with the last of Ottoman Sultans was residing there.
Closed: Dolmabahce Palace (Monday and Thursday) 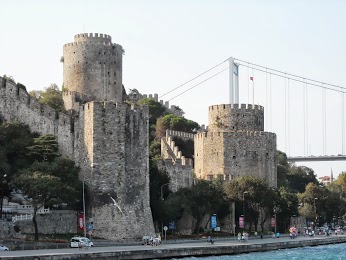 The Forteleza a monument-art built in the Narrowest section of the Bosphorus and fluid, covering 30,000 m2. In preparation for the conquest of Istanbul, the castle was built in about four months is a relatively short period. Said that some 1,000 teachers and workers in historical documents in 2000 were used for construction.

Beylerbeyi Palace was commissioned by Sultan Abdulaziz (1830-1876) and built between 1861 and 1865 as a summer residence and a place to entertain visiting heads of state.
The palace, built on a pier built by the sea is a two-story structure built on a high brick basement. The palace, the Harem (north) and Mabeyn-i Humayun (the southern part) of consısted offices, three innings, six large living room 24 rooms, 1 bathroom and 1 bathroom. House rectangular shape.
Closed: Beylerbeyi Palace (Monday and Thursday)

After a journey of about 45 minutes in the Sea of Marmara, arrive at the Prince’s Islands, after Pleasure Island of Byzantine princes. We stop at Buyukada, the summer resort and a landscape of pines, with cafes and fish restaurants Ottomans behold splendid Victorian villas and summer garden with colorful flowers, and explore the island on a tour of the horse-drawn carriage (Phaeton). These islands are closed to traffic.In the evening return to Istanbul by ferry in the evening by 17:30 to 18:00. Along the way you will also see the Topkapi Palace, the Tower of Leander and historic Uskudar district, next to the Bosphorus from the ferry.

Hotel pick up around 20:00, the show ends at midnight.
Do not miss this experience. With the price of a good meal you can also enjoy the best examples of traditional Turkish hospitality.
The menu includes main meal, appetizer dishes, two local alcoholic drinks and a fruit plate or in the desert.
Show includes belly dancing, live music from several languages, including Turkish folk music and traditional Turkish folk dance groups and performances. We highly recommend that you choose «raki» option for local drink. 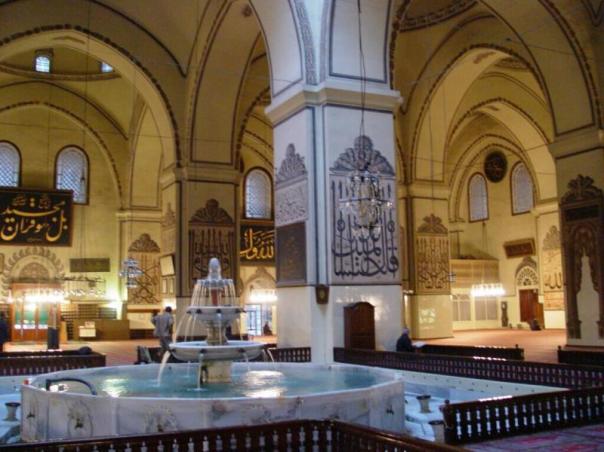 The city of Bursa (Great Mosque)

Enjoy magnificent views of the parks and gardens of historic Bursa Tophane district on the slopes of the mountainside. Experience the City Museum, which brings to life the story of Bursa, culture, bathrooms renowned food, and the arts. See, simple and rich craftsmanship exquisite calligraphy, the Great Mosque in the 600 years old. Stop by Koza Han, the last Caravanserai on the Silk Road, and a meeting place for travelers through the centuries. Visit the Green Mosque, named for its beautiful turquoise – colored tiles and is Considered the jewel ‘of Bursa. Being accepted by the 700 years of Ottoman architecture in the last remaining Ottoman town. Relax beside a waterfall and end a perfect day on the mountain. Olympus natural beauty, before returning to Istanbul. Uludag, the legendary Mount Olympus, where the gods are said to have seen the Trojan War in Greek mythology.

Bursa: The first capital of the Ottoman Empire. Osman Bey, who was born in a town of Bursa, conquered the towns around Bursa in 1299 and this year is regarded as the founder of the Ottoman Empire, which was to survive for over 600 years. (The word Ottoman is derived from his name, Osman) Bursa is located in the northwest of the Anatolian peninsula and Southeast of the Sea of Marmara. The shores of the Marmara Sea are 135 km away. The MOST IMPORTANT peak in the province is Uludag (Legendary Mount Olympus), a ski resort and national park.

(2543 m), 36 km south of Bursa, is a favorite of the country, winter sports centers and as well as skiing, its richness of flora and fauna has become a National Park and summer comotrekking and camping are also popular activities. Previously it was known in ancient times as Uludag Mysians Olympus, and is known in mythology as the place where the gods watched the Trojan war. 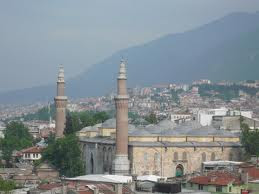 (Grand Mosque of Bursa), was built between 1396 and 1400 by the Sultan Bajazet, composed entirely of cut stone, with very thick and high walls, 12 heavy four edged grade as of 20 domes with pendantives with. It is the most classical and monumental sample of the multi – domed mosques. It has the Largest size (318 square meters) among all Turkish mosques with its rich and roomy space.

It was built between 1419 and 1420, called Green Mosque due to the green turquoise tiles used on adornments. This is one of the most Important structures of the Ottoman period in Bursa, and the mosque is famous for its adornments much more than its architecture.

Unique structure with its tile adornments. Its fully tile covered balcony is a masterpiece of art. One of the most beautiful examples of Ottoman wooden work, the door was built by transition technique of walnut, decorated with geometric and is the symbol of Bursa, is one of the most beautiful examples of Ottoman tomb architecture. Octagonal structure, which can be uploaded via a marble staircase, is covered by a lead dome perched on a high hoop. It is a ripción therein.
This tour includes roundtrip Istanbul, the all day tour of Bursa, English and Spanish speaking professional private guide, private car a / c, parking fees, gasoline taxes, entrance fees, same day pick up and drop at hotel Istanbul. 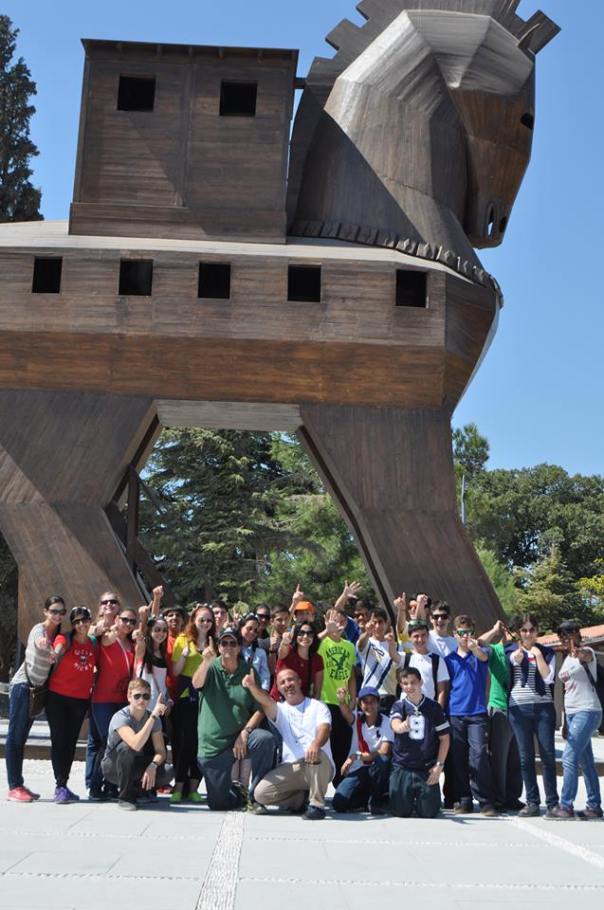 The ancient city of Troy that was immortalized in Homer’s epic Iliad and Odyssey. According to archaeologists, Troy is just one of the nine cities that were built on top of the other, the oldest of which dates back to 3000 BC. His story covers the start of an area of the northern Gulf of Edremit, and Reaches the southern shores of the Marmara Sea. To the south is the Ida Mountain (IdaMontaña), an attractive area to visit 30 km. away from Canakkale, in Hisarlik. Archaeological excavations revealed the different time Periods variaszonas settlement, the city walls, the house foundations, a temple and a composite port teatro.Un symbolic wooden horse grande.Histórico recalls the Trojan War, Alexandria – Troas was built in the 3rd century BC St. Paulhabía visited here twice, and the third mission trip to Assos was started from here.

One of the entrances of Troy

The City of Edirne

Edirne was the second capital city. After the conquest in 1361, the capitalotomana was moved here from Bursa. During this period the population aumentórápidamente until Istanbul was conquered by Mehmet II. This short-term capital (88 years) was left behind a lof of mosques, Hamams (baths), bridges, covered bazaar, towers, etc.. Now, Edirne is a border town and encuentrael meeting point of the Tunca and Meric River Arda. You will ignore the deep restos Ottoman culture.

Impressived The Selimiye Mosque is the monument of Ottoman architecture. It was built in 1569-75 by the architect Sinan, who described this mezquitacomo «This is the work of my teacher.»
The diameter of the main dome is 31.30 m and 43.28 m high. Four minarets each have balconies accessed by a separate staircase trees deminarete within.

The oldest mosque in Edirne, is famous congrandes calligraphy works on the front.

Three balconies Mosque Selimiye The largest mosque is second after, the name means «tree with balconies.

Connects the city is 263 m long and of Karaagac and ELCENTRO city. Which was built in 1842 by Sultan reigns. 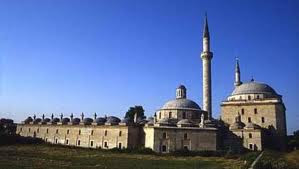 It is near the Tunca River, The largest complex of physical and Spritual Ottomans health. There was a medical center, it Becomes a «Health Museum» at the resort. You can get to know the development of medical science (especially mental illness) ottoman.

The tower of the Gate

Also known as the Tower of Macedonia, Fire Tower, the Clock Tower. Manument could understand this was one of the four towers of the Castle of Edirne. Then it became a clock tower that was burned in a fire.

The city of Iznik (Nicea) – All Dayicea

Explore the main attractions of the city of Iznik, Nicea, before the old, famous for being the host of the 1st and 2nd ecumenical councils of Christendom.

Let stand in Iznik (Nicea), a small town next to a picturesque lake, historically famous for hosting the first Ecumenical Council of the Church at the Council of Nicea in 325 AD. On arrival, visit the ancient walls of the Roman and Byzantine MezquitaVerde, beautifully decorated with light blue ceramic and built by otomanos.A then proceed to the remains of the church of St. Sophia, the site of the Second Council of Nicaea in the year 787, and see the remains of mosaic floors and frescoes. After a break for lunch on the lake, visit the workshops of porcelain tiles to see how world famous Iznik Iznik pottery,

Ability to organize any type of vehicle.

say! ..
When ever and need Professional Guide
Please wait
Always more than you are WELCOME
Your pleasure is my pleasure